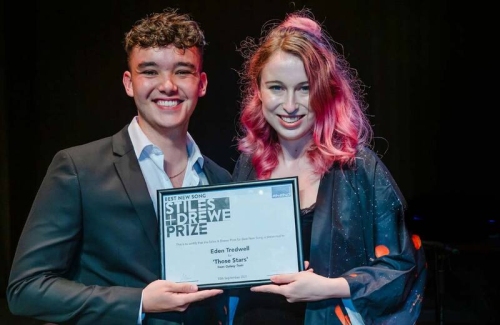 Wow! What a night! Thank you to everyone who joined us last night to celebrate new writing - both live at the Hackney Empire, and to those who joined us on stream.theatre. This is the first time the Stiles & Drewe Best New Song Prize has been presented as a stand-alone concert, and we are delighted with how it went.

Huge congratulations go to Eden Tredwell who won this year's Best New Song Prize for her song 'Those Stars', which was performed superbly by Jack Ofrecio. Eden has now received £1000 to put towards the development of her work.

In addition to the main prize, this year we were also able to grant the Vision, Voice & Potential Award again, this time to the wonderful Flora Leo for her song 'Our Fight Is Not Over (The Ballad of Lexa)'. Performed by Karen Mavundukure, Flora has been awarded £250 towards the development of her work. This prize is kindly sponsored and judged by the creators of SiX, Toby Marlow & Lucy Moss.

The concert is still available to stream on stream.theatre until the 30th September.